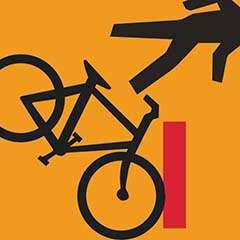 Curbside Haiku by John Morse is a Project to Protect Pedestrians

Ana Lopez — December 7, 2011 — Art & Design
References: brandflakesforbreakfast & laughingsquid
Share on Facebook Share on Twitter Share on LinkedIn Share on Pinterest
In a busy city like New York, pedestrians and cyclists risk their lives every day, which is why the New York City Department of Transportation is releasing a campaign called Curbside Haiku by John Morse. This yellow collection of street signs is funny and certainly informative, as it explains in comical graphics the dangers that city dwellers are exposed to when near roads.

Two hundred signs will be distributed around the city with the purpose of lowering the number of accidents and deaths in New York. These illustrations are clever and entertaining, which will ensure that people actually pay attention to them. Additionally, each sign is accompanied by a clever message like "Oncoming cars rush, Each a 3-ton bullet. And you, flesh and bone," or "Cyclist writes screenplay, Plot features bike lane drama, How pedestrian."