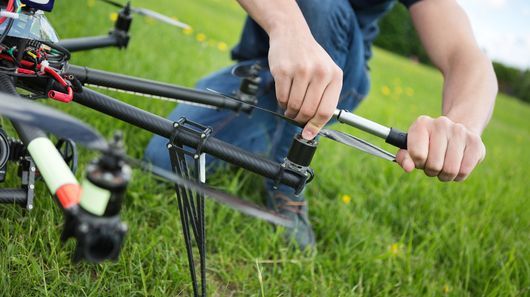 These Drones Gather Important Information About the State of Crops

Rahul Kalvapalle — May 15, 2015 — Tech
References: raptormaps & gizmag
Share on Facebook Share on Twitter Share on LinkedIn Share on Pinterest
American startup RaptorMaps is developing a way to use drones to make crop mapping easier for farmers. Keeping track of crops' health is important but excruciatingly difficult for farmers; these drones will help ease the process, hopefully boosting farm harvests.

RaptorsMaps' project is being supported by a $100,000 cheque from MIT. The drones themselves are designed to fly over farms while capturing multispectral images. The system then uses data analytics to identify unhealthy crops. Damage caused by pests, weed or disease can all be depicted. Data picked up by the drones is relayed to the cloud, allowing farmers on the ground to effectively maintain and deal with their crops.

While many people associate drones with war and violence, these crop mapping drones show that the technology can be used, in the words of RaptorsMaps co-founder Forrest Meyen, to "feed the world".