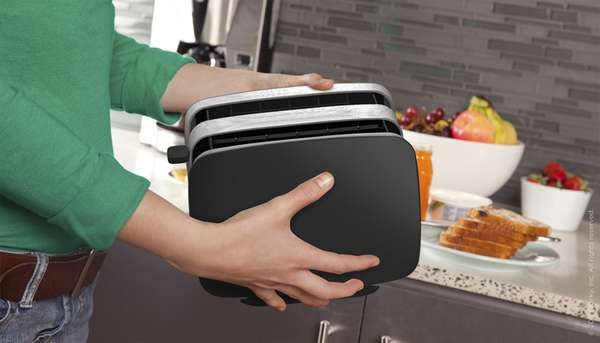 The Crisp Toaster Concept Folds to Free Up Counter Space

Susan Keefe — March 28, 2012 — Lifestyle
References: quirky & incrediblethings
Share on Facebook Share on Twitter Share on LinkedIn Share on Pinterest
Create a more functional kitchen with this clever Crisp Toaster Concept from 'Quirky.' If you're like most apartment-dwelling humans, you're constantly short of space. Between the culinary necessities, like a sink, oven and fridge, there usually isn't room for much else in a pint-sized kitchenette. Counter top appliances, such as traditional toasters, exacerbate the issue making even the simple act of slicing an apple a frustrating chore.

Thanks to the Crisp Toaster's innovative design, you can collapse the device's bread compartments for easy sleek storage. Capable of slimming down to a third of its size, the accordion-inspired appliance will help keep your culinary workspace clutter free. With the Crisp Toaster in your corner, you can enjoy your toast without sacrificing the little prep space you have.