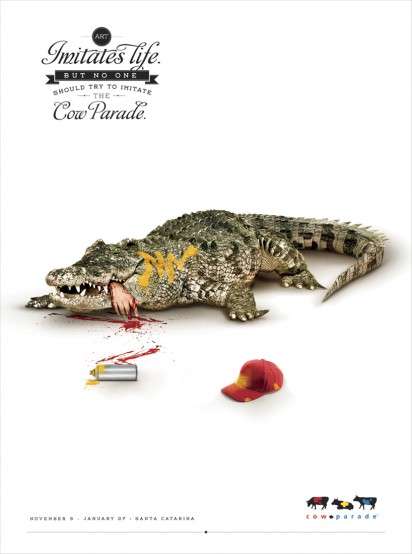 Meghan Young — November 29, 2011 — Marketing
References: cowparade & ibelieveinadv
The Cow Parade 2011 ad campaign shows exactly why the founders of this unique and international public art event chose to focus on the cow. Any other animal could have caused some serious consequences; namely, the death of the artist. Not to mention that the cow itself is a beloved and often revered animal all around the world.

Conceived and executed by Propague, an ad agency based in Brazil, the Cow Parade 2011 ad campaign centers around a lion, alligator and elephant as well as an unfortunate human soul who got a little too close to all three animals. Hilariously shocking, the Cow Parade 2011 ad campaign also portrays the overall fun and lightheartedness of the "world's largest public art event," as touted by Cow Parade's website.