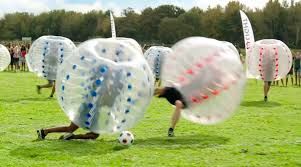 The Coors Light Games is a Two-Day Ultimate Party Experience

Christopher Magsambol — August 10, 2015 — Lifestyle
References: www2.tsn
Share on Facebook Share on Twitter Share on LinkedIn Share on Pinterest
TSN and Coors Light have joined forces and embarked on a summer sports-inspired tour of Canada called the 'Coors Light Games.' Targeted at amateurs, the contest consists of fun, summer activities that are enjoyed during Canadian summers -- and turning them into competitions.

The event concludes with a big two-day championship held at the end of the summer. Meanwhile, the 'TSN Summercentre' team is touring Canada, and bringing a number of the activities into people's backyards.

After signing up on the website, many games can be played. Some activities include bubble soccer, in which all participants are not only trying to score a goal, but also knock opponents off their rocker while wearing 'zorb balls.' Other sports include Giant Jenga, as well as a twist on beer pong called Volleyball Pong.
5.5
Score
Popularity
Activity
Freshness
Get Trend Hunter Dashboard

$4,000 Water Games
The 10-Person Water Totter Lets You Rock and Sway With the Waves