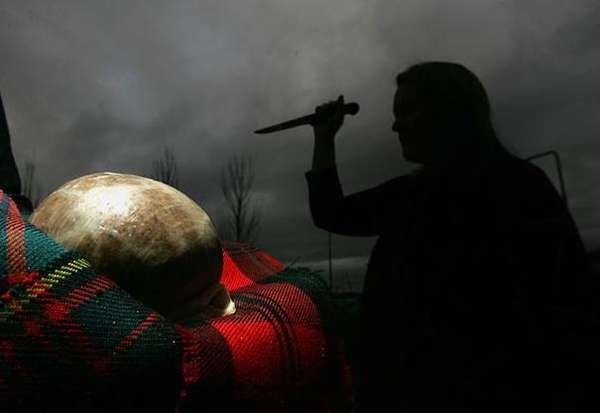 Bianca — July 18, 2008 — Lifestyle
References: newsweek
Share on Facebook Share on Twitter Share on LinkedIn Share on Pinterest
We've featured some wickedly daring foods before, but NewsWeek rounded up a delicious sampling of eight forbidden meals just starving for a mention. A mere description in words wouldn't quite be sufficient to churn those stomachs, but the corresponding gallery certainly does the trick!

Featured in the photos is a Scottish stabbing ritual for Haggis, internal sheep organs, followed by an image of the deadly pufferfish, or Tiger Fugu as its known in Japan. Also seen is Casu Marzu maggot cheese "a runny white cheese made by injecting Pecorino Sardo cheese with cheese-eating larvae," according to NewsWeek. Yes, it's dangerous to ingest. The larvae can infect digestive organs or migrate to infect your eyes. It's illegal in Italy but people find a way to produce, sell and consume it anyway.

The fourth image shows raw milk cheese, or a "ripe hunk of unpasteurized French brie" which is prohibited by the FDA. Absinthe, a green liquor is also shown, which was banned for its hallucinogenic properties a long time; however, a modified version is now sold in many countries.

Sassafras makes the list because the oils found in its root bark were found to be linked to liver cancer in the 1960s, today, safrole-free leaves can be bought which still have all the sassafras flavor.

Although not banned everywhere, Lobster make the list because they soon may be taken off shelves. After PETA protested, Wholefoods was one of the first to pull the crustaceans from their stores back in 2006.

The gallery ends with one of the most internationally agreed upon unethical foods out there: foie gras. Thankfully, the sick, swollen livers of force-fed ducks and geese is being banned in more places, and by 2012, the entire state of California will prohibit its consumption.