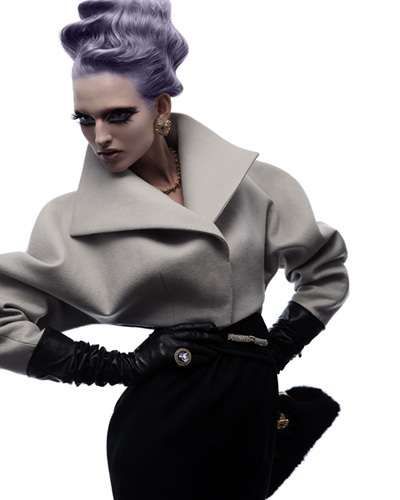 The 'Color me Beautiful' Series Showcases a Retro High Society

Josh Triantafilou — June 25, 2012 — Fashion
References: behance.net & behance.net
Share on Facebook Share on Twitter Share on LinkedIn Share on Pinterest
In the recent editorial 'Color me Beautiful,' stylist Kattaca draws on various high society looks from the 1940s. Although the 40s are often remembered for World War II rather than fashion, there were a number of classy, elegant styles that emerged and matured during this period.

From chic fur frocks to posh red dresses, Kattaca styles the model in various looks that are clearly inspired by the past, but possess sleek, futurist appeal as well. He emphasizes sharp angles and high contrasts to produce a look that is smart, crisp and striking.

Although the clothing is the most prominent feature of editorial, it wouldn't be complete without hair and makeup. For this credit is owed to hair dressers from X Precision and Lewis Amarante, respectively. As with most Kattaca editorials, the series was shot by photographer Paco Peregrin, who did a wonderful job tying the whole series together.
2.8
Score
Popularity
Activity
Freshness
View Innovation Webinars