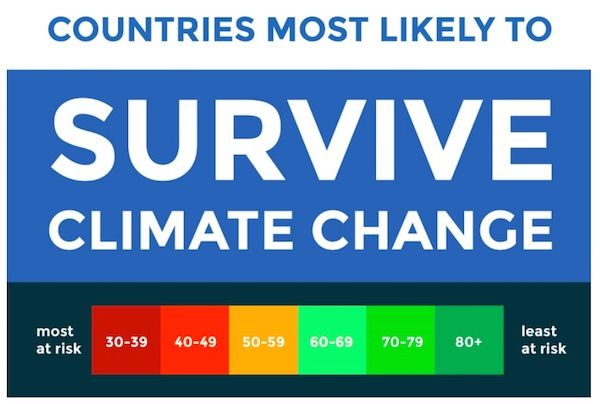 This Climate Change Map Shows the Countries Whose Survival is Threatened

Alyson Wyers — July 2, 2015 — Eco
References: blog.theecoexperts & designtaxi
Share on Facebook Share on Twitter Share on LinkedIn Share on Pinterest
This climate change map indicates which countries are most likely to survive. Created by Eco Experts, the infographic includes information from the Notre Dame Global Adaptation (ND-Gain) Index and their ranking of states that have the highest likelihood of surviving devastating results of climate change.

The UK, Audralia and Scandinavian countries like Norway, Sweden and Finland appear to fare the best according to the climate change map. While North America and most of Europe will be ok, it comes as no surprise that the global south are at extreme risk. Thisincludes most of Africa and developing countries in Asia and the Middle East, such as Afghanistan, Myanmar and Yemen.

Unfortunately, this infographic will likely do nothing to rouse the passions of people in North America and Europe to take action.
5.2
Score
Popularity
Activity
Freshness
Get Better and Faster