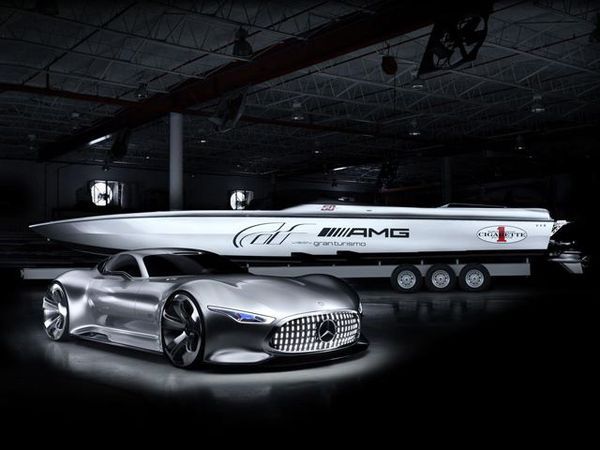 Michael Hines — February 18, 2014 — Autos
References: cigaretteracing & carbuzz
Share on Facebook Share on Twitter Share on LinkedIn Share on Pinterest
The Cigarette Racing GT Vision concept is no ordinary boat. For starters, this high-speed vessel is a one-off and is being sold for $1.5 million. Also, it was inspired by a Mercedes-Benz concept car that exists only in the game 'Gran Turismo 6.' The car in question, the Vision Gran Turismo, can only be driven in the virtual world, although a non-operational physical version did make an appearance at the 2013 Los Angeles Auto Show.

The Cigarette Racing GT Vision concept is a bit faster than its virtual counterpart, boasting two 9.0-liter V8 engines good for 1,650 horsepower. Its beefy engines help push the boat to a top speed of 140 mph, a respectable number both on land and water. The boat's interior is as luxurious as they come, and is covered in carbon fiber and Alcantara and filled with the latest technology.
6.4
Score
Popularity
Activity
Freshness
View Innovation Webinars