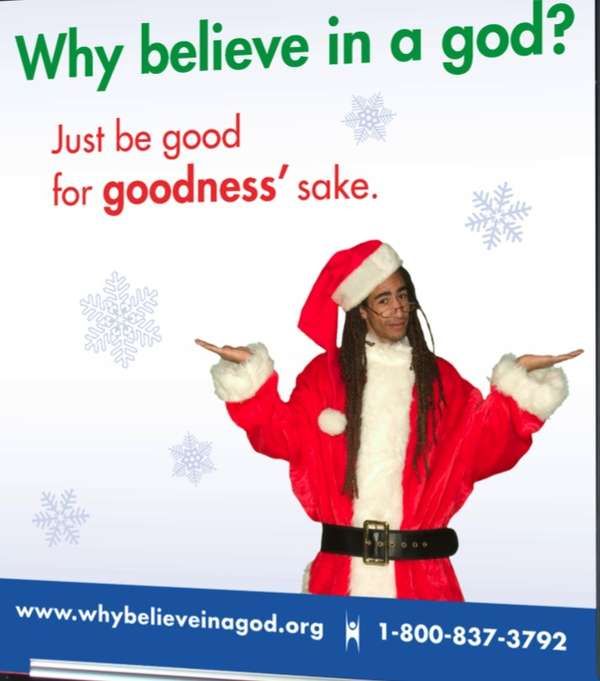 Why Believe in a God?  Campaign

Beginning November 18th, buses in Northwest Washington will be seen with the American Humanist Association motto, "Why believe in a God? Just be good for goodness sake”, adorning the exterior. The dreadlocked Santa poster will make its official debut on the inside of buses on December 1st.

For those who live outside the United States, it truly has become a tradition here for some atheists, agnostics, those of other religions, and humanists, to partake in a battle of words with Christians around this time of year.

Christians accuse unbelievers of trying to take the “Christ out of Christmas” which, in the case of the “Why believe in a God?” campaign, they do have a point, although the ads are meant to help unbelievers know they aren’t alone. On the other side, you have unbelievers accusing Christians of trying to shove God and baby Jesus down their throats. Soon to follow will be those offended by those who say, “Happy Holidays” or “Seasons Greetings” instead of “Merry Christmas” and vice versa.

As for those who don’t care to enter into the immature, offended-at-everything-drivel-that-surrounds-Christmas, regardless of belief or lack thereof? Well, we try like heck not to let any extremes ruin the spirit of the holidays, enjoy a few eye rolls, and have a few laughs listening to Adam Sandler’s classic ‘Hannukah Song’ over and over again to boot.
2.3
Score
Popularity
Activity
Freshness
Attend Future Festival