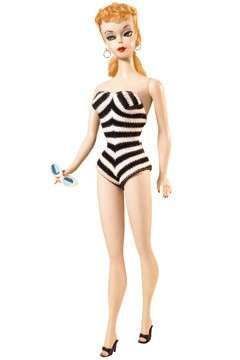 Katherinev123 — October 13, 2009 — Fashion
References: wwd & stylelist
Share on Facebook Share on Twitter Share on LinkedIn Share on Pinterest
Christian Louboutin is one of the designers given the opportunity to give Barbie a complete body and style overhaul. The new Christian Louboutin Barbie, which includes three dolls set to roll out over the coming months, has been reshaped head to toe, and one major change is the size of Barbie’s ankles.

“He found her ankles were too fat,” states a Louboutin spokeswoman. And so Barbie’s plastic cankles have been made over, complete with special clothes and styling to focus attention away from her, um, problem area. Obviously, the Christian Louboutin Barbie won’t be wearing booties or shoes with ankle straps this season.
5.6
Score
Popularity
Activity
Freshness
Get Better and Faster