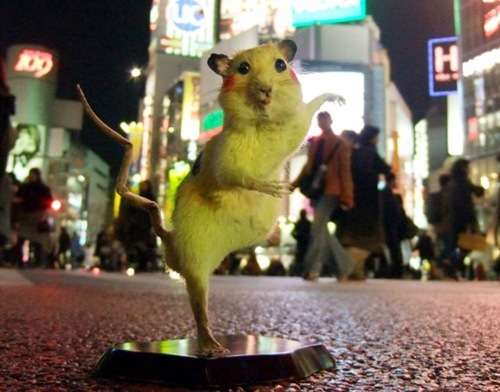 Ana Lopez — October 27, 2011 — Unique
References: chimpom.jp & odditycentral
Share on Facebook Share on Twitter Share on LinkedIn Share on Pinterest
The Japanese iconic cartoon Pikachu is adorable, but the Chim Pom ‘Super Rats’ will give many a chill down their spine. Chim Pom is an art collective from Japan who decided to give Tokyo’s rat problem a little artistic twist. Tired of these rodents, the group went on an urban hunt to catch as many as they could to turn them into real-life taxidermied Pikachus.

Apparently, the city’s animals are immune to poison, so Chim Pom created a solution to these “super rats,” as they are known in the Asiatic region. By using cages and nest, the group, which is formed of six members, managed to catch a good number of rodents to gave them a particularly unique make over. The Super Rats were taxidermied, painted in yellow and decorated with red cheeks. Lastly, in order to create Pikachus’ zig-zag trademark tail, a wire was struck through their long behinds.