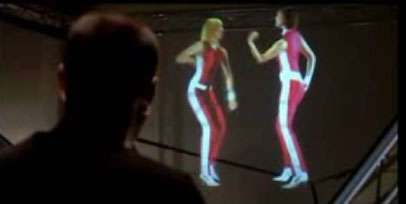 Carlos Calderon — March 31, 2007 — Unique
References: blog.pcnews.ro
Share on Facebook Share on Twitter Share on LinkedIn Share on Pinterest
Holographic ads are ready to hit us in the eyes. This video features a new technology called Cheoptics360. The technology was released at the end of 2006, but we haven't yet seen any cool applications in the advertising world. When can we expect to see this technology take off?

"Cheoptics360 is a new medium that provides hitherto undreamt of opportunities for narrating in 3D. The medium will move the boundaries for visual communications in public places, and will change how people in the film and advertising worlds and architects work. You are standing in Times Square in New York. Imagine a building with a large glass pyramid on top. Inside a hologram of a full-size true-to-life Madonna is performing. Objects and symbols float around her, reinforcing the musical impression of the living images â€“ like a music video on an MTV broadcast virtually in true life. It may sound like a scene from the future, but with Cheoptics360 it is already possible. The fact is that Cheoptics360 provides entirely new opportunities for showing films and presentations in inspiring and exciting ways. Observers see floating video images, which can be viewed from all angles, 360 degrees around: a spacious 3D experience never previously encountered." - PCNews.RO
3.7
Score
Popularity
Activity
Freshness
View Innovation Webinars