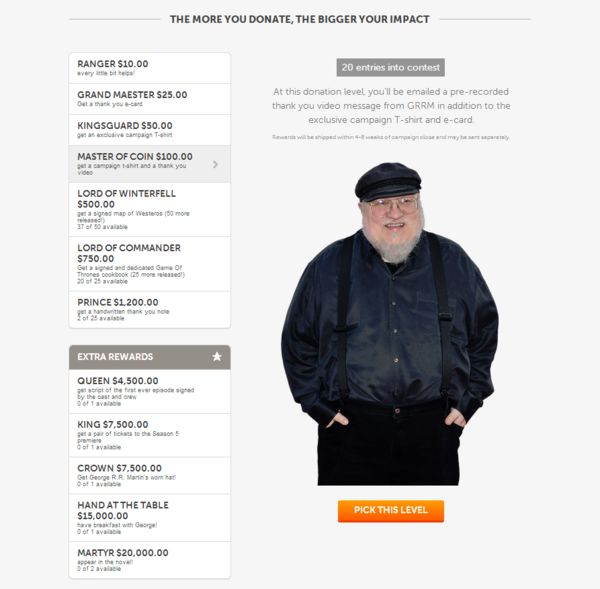 George R. R. Martin Wants You as a Character in Game of Thrones

Laura McQuarrie — June 11, 2014 — Pop Culture
References: prizeo & prexamples
If you've ever dreamed of being a character in Game of Thrones, this dream will become reality if you happen to have £20,000 to spare. This is just one of the many incentives offered as part of George R. R. Martin's current Prizeo campaign to raise money for the non-profit Wild Spirit Wolf Sanctuary and The Food Depot of Santa Fe.

Donors to the campaign will automatically be entered in a draw to win a tour of the wolf sanctuary plus a helicopter ride with Martin himself, where he assures there will be plenty of time to talk about direwolves or other things from Game of Thrones universe. Other great rewards for donating include signed maps of Westeros, Game of Thrones cookbooks, signed thank you notes, Martin's own hat or tickets to the Game of Thrones Season 5 premiere.
3.1
Score
Popularity
Activity
Freshness