Top 35 Retail Trends in February
Next
Set of
Related
Ideas 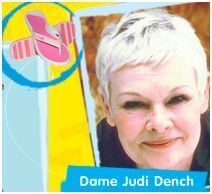 Pearl — August 17, 2008 — Celebs
References: roycastle.org & luxist
If you have a secret shoe fetish and are a fan of celebrities such as Judi Dench, Daniel Radcliffe (Harry Potter) and Spice Girl, Melanie C., you can bid for a pair of their shoes soon. At the same time, you'll be donating to a good cause. Judi Dench is a staunch supporter for the De-Feet campaign because she lost her husband to the disease.

The Roy Castle Lung Cancer Organisation is Britain's "only charity wholly dedicated to defeating lung cancer. The aim of their De-Feet Campaign is to raise awareness for lung cancer which is still a top killer. The organisation provides funding for research, public education and support for sufferers and their families.

The shoes will not be shown until September 12 when that portion of the website goes live.
2.1
Score
Popularity
Activity
Freshness