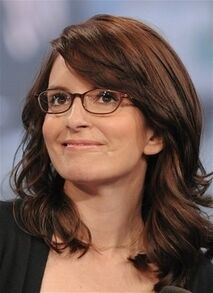 Jennifer Astle — December 2, 2008 — Celebs
References: news.yahoo
Share on Facebook Share on Twitter Share on LinkedIn Share on Pinterest
Our favorite comedienne and Palin impersonator, Tina Fey, is a noticeable woman, with a noticeable scar. Our celebrity-obsessed culture often demands that stars reveal very private information about themselves. Stars like Seal have had to endure questions about scars and marks, and who can forget the awkward moment on Oprah where a fan(atic) grilled Brad Pitt about the meaning of his tattoos?

Those of us who love Tina Fey have to admit we have always wondered where she got the scar on the left side of her face. Now, we have an answer.

Fey’s husband, Jeff Richmond has revealed the source of her scar in an interview with Vanity Fair. When Fey was five years old, a stranger slashed her face in her own front yard. Fey has said that she’d rather not discuss the issue, because she doesn’t want to appear to be “exploiting” it.

Fey said the scar never concerned her until her television career when camera angles called attention to it. This clip shows 30 Rock cameras strategically showing Tina’s “better” side.

Scar or no scar, Tina Fey is one of the most amazing, beautiful women of our time, and apparently has the attitude to match! You have to stand in awe of someone who can retain such a wonderful sense of humor after such a tragic, terrifying incident.
3.7
Score
Popularity
Activity
Freshness
Access Advisory Services