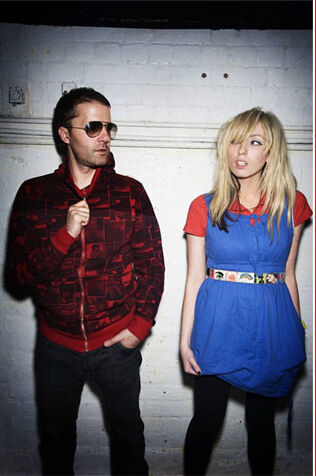 The Tings Tings at Fashion Week

Sure it's a bit whiny, but the beat is good and it's pretty catchy. The song was played at several shows during New York Fashion Week including at the Diesel show on February 5. If you check out the Diesel show coverage we posted, you'll be launched into the glitz of fashion week, a sure memory to fire that bounce in your step.

CosmoGIRL! blog, the Daily Kiss, has writer Megan covering fashion week and she was just as excited about the song which she says she'd heard at three shows prior to Diesel.

"At Diesel they played it during the show and when all the models walked out together at the end. Who knowsâ€” fashion designers start style trends, maybe they can predict the next big band too!"

The Ting Tings are an indie pop band from Salford, UK composed of duo Katie White who does vocals, guitar, bass drum and Jules De Martino who does also does vocals and drums. Check out their songs, including That's Not My Name on their MySpace page.

Check out the song in part II of the videos in the following trend: