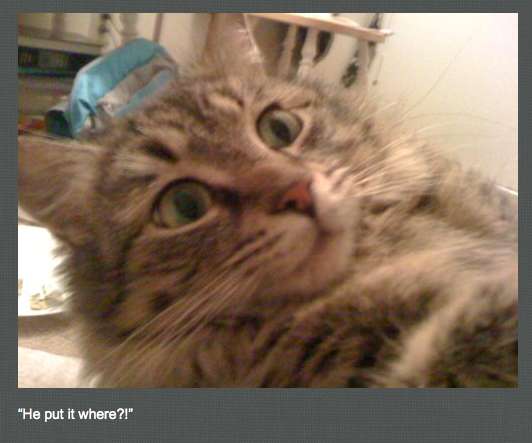 The Cats Watching You Tumblr is Hilariously Addictive

Souzan Michael — September 4, 2011 — Naughty
References: buzzfeed & catswatchingyouhavesex.tumblr
If you are currently eating or drinking anything, I suggest you put it down before you look at the Cats Watching You Have Sex Tumblr. This amazingly hilarious Tumblr features pages upon pages of photos of cats looking shocked, appalled, impressed, and any other emotion you would imagine your feline friend experiencing while watching two people have sex.

The Cats Watching You Have Sex Tumblr comes with the following heading: “You’ve always pretended they weren’t watching you get it on. You’ve always been wrong.”

If that doesn’t sell you on the idea of this Tumblr account, then I don’t know what will. Some of my personal favorite photos include the captions: “Well…that body is certainly not a wonderland,” “He put it where?!” and “Dude, I don’t think either one of you have had enough booze to justify your actions right now.”

Do yourself a favor and enjoy the Cats Watching You Have Sex Tumblr for a guaranteed laugh.
6.5
Score
Popularity
Activity
Freshness