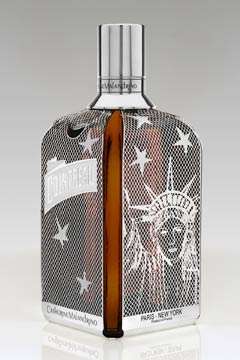 Katherine Vong — October 14, 2009 — Marketing
References: cointreau & stylelist
French fashion designer Catherine Malandrino has exuded her impeccable taste on the design of a limited edition bottle of Cointreau. The Catherine Malandrino Cointreau bottle for the French liquor company features an all-American theme: the Statue of Liberty amongst a scatter of stars (and Malandrino’s signature).

The design, however, doesn’t come as too much of a surprise as Malandrino is known for using Americana motifs in her fashion collections, such as her iconic flag dress. In step with the Catherine Malandrino Cointreau bottle, mixologist Dale DeGroff created a cocktail appropriately titled ‘Madame Liberty’ for the designer. Check out the recipe here.
3.6
Score
Popularity
Activity
Freshness