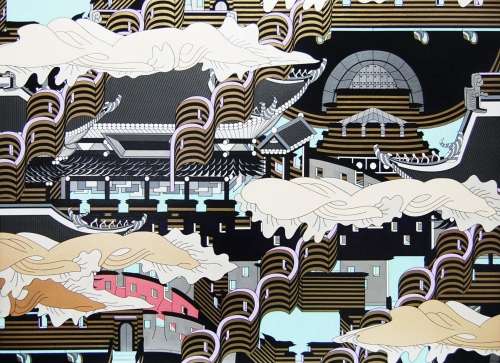 Jason Soy — May 3, 2012 — Art & Design
References: casperkang & juxtapoz
Share on Facebook Share on Twitter Share on LinkedIn Share on Pinterest
Psychedelic art and traditional Asian art are two forms of expression that attract vastly different crowds, but Casper Kang has managed to fuse the two styles together to create something inventive yet familiar. Littered throughout these illustrations are motifs, such as clouds, snake scales and floral designs, that you’d expect to see from images originating from China, Korea or Japan. The way Kang pieces these elements together, however, is highly evocative of poster art you’d expect to see during the late 1960s, when psychedelic imagery reigned supreme.

Casper Kang, who is originally from Toronto, has always enjoyed the arts, though he never thought to pursue it seriously until he moved to Korea. After a 2-year period working at several architectural firms, he abandoned the corporate world to pursue a painting career. He hasn’t looked back since and continues to enjoy a fine arts career living in Seoul.