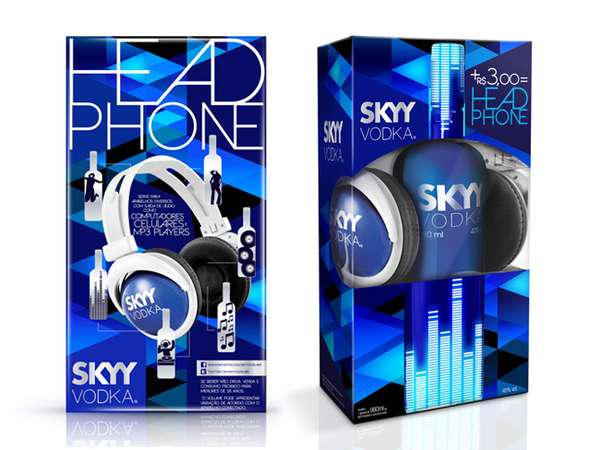 Susan Keefe — February 4, 2012 — Lifestyle
References: casarex & packagingoftheworld
Share on Facebook Share on Twitter Share on LinkedIn Share on Pinterest
SKYY Vodka turned to the creative minds at the celebrated design firm Casa Rex to help the brand make a striking debut on the Brazilian market. The premium vodka brand has enjoyed enviable success in North America and other parts of the world, but now it's setting its sites on the South American market. To make the vodka's first foray onto Brazilian liquor store shelves, special Casa Rex created a eye-catching SKYY Vodka party pack that includes a set of exclusive headphones in addition to the vodka.

Sporting the same intoxicating royal blue of the iconic bottle, the SKYY Vodka party pack highlights the fun and excitement of a night out on the town. The headphones appear to be plugged into the bottle making the vodka appear as a beat blaring force of fun. The graphics on the box feature silhouetted party-goers, which fits the DJ-like aesthetics of the headphones.