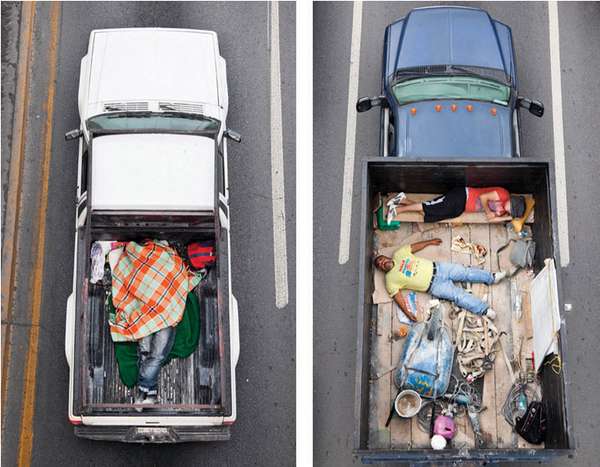 Meghan Young — May 30, 2012 — Fashion
References: alejandrocartagena & mymodernmet
The Car Poolers photo series offers a fun look at Mexican commuters as they travel back home after a long and hard day of work. Since many of them hitch rides on pickup trucks, the series focuses on aerial shots that hone in on the outdoor passengers. Sprawled in the back in lounging positions, some of them are captured sleeping in the Car Poolers series while others are simply resting.

Shot by Alejandro Cartagena, a photographer based in Mexico, the Car Poolers photo series is particularly interesting because accompanying the commuters in the back of the trucks are job-specific tools, which helps to flesh out the persons captured. On an eco-friendly note, Cartagena observes, "Even though these workers are not conscious of the ecological impact they have by traveling this way as they are doing it to save time and money, they are a silent contributor to the preservation of our city and planet."
5.9
Score
Popularity
Activity
Freshness