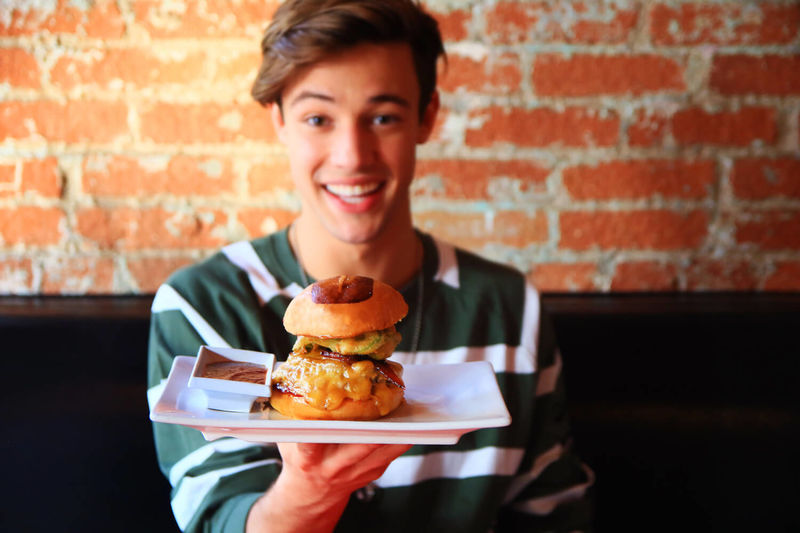 Katherine Pendrill — December 28, 2016 — Lifestyle
References: umamiburger & chewboom
Share on Facebook Share on Twitter Share on LinkedIn Share on Pinterest
As part of its ongoing Artists Series, Umami Burger has reached out to social media star Cameron Dallas to create a delicious new burger. In the past, the brand has collaborated with well-known stars such as actress Mindy Kaling and food presenter Alton Brown to create specialty creations inspired by the celebs. Now the brand is reaching out to some younger stars in an effort to connect with millennials and Generation Z.

The Cameron’s Dallas BBQ Burger is an exclusive burger created by Dallas himself, who is best known for his Vine videos. To capture Dallas' unique sense of humor and playful personality, Umami Burger helped the star come up with a gourmet burger made with a beef patty, miso-maple bacon, sharp cheddar cheese and tempura serrano peppers. The entire burger is then smothered in a savory BBQ sauce and served on a Portuguese-style bun.

Not only is the influencer-inspired burger delicious, but a dollar from each burger sold will also go directly to the Children’s Hospital Los Angeles.
3.3
Score
Popularity
Activity
Freshness
View Innovation Webinars