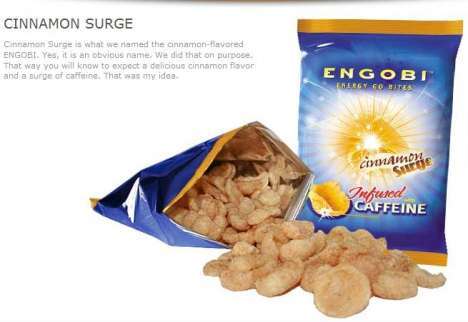 I wasn't sure if early afternoon was an appropriate time to experiment, but caffeine logic aside, I tore into the small blue bag of cinnamon-flavored Engobis...

I popped one onto my tongue and slowly allowed my mind to focus on this experience taking place on my palate. The texture was that of a bacon crisp, the flavor like Cinnamon Toast Crunch.

The second flavor, lemon, was peculiar too, and instantly I thought of yellow Fruit Loops.

A shocker, nonetheless, and likely a confusing encounter for the unexpecting mouth. Had they marketed it as a cereal instead, I think the product would be more quickly embraced. It would be the ideal alternative for those who don't like coffee, but still yearned for an artificially ingested morning boost. What better way than through a caffeinated, sugar-coated breakfast? After all, if people are eating Fruit Loops and Cinnamon Toast Crunch, they know people don't mind the flavor.

That being said, I think even as a chip, the peculiar taste of Engobi could appeal to the tween and teen demographics.