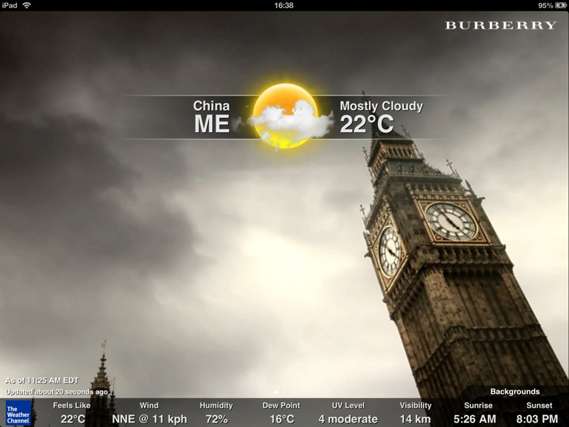 Katherine Vong — August 10, 2012 — Marketing
References: uk.burberry & creativereview
The Burberry Digital Weather Billboards have been launched by the luxury fashion brand to appeal to the British obsession with the weather.

Burberry's creative campaign comprises digital billboards that are consistently updated with the current weather in London, and which promote Burberry products, like sunglasses, scarves and boots, depending on the weather. They have been placed around the world in major cities including New York, London, Paris and Hong Kong, and feature images of places around London along with the city's local temperature. In addition to the Burberry Digital Weather Billboards, the brand has partnered with the Weather Channel to air advertising on the network as well as the Weather Channel's mobile app that features London's weather during the 2012 Olympic games.