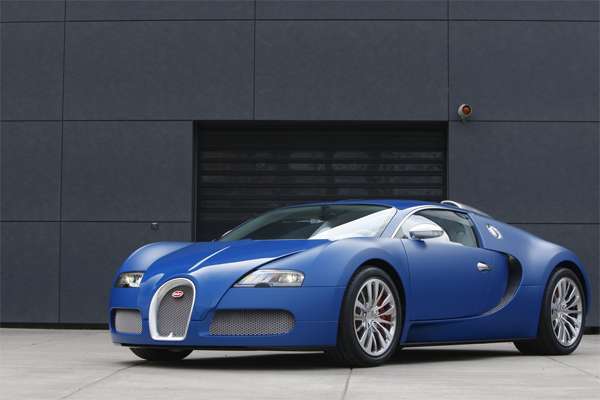 Alexandra Choli — March 13, 2009 — Autos
References: bugatti & jalopnik
Share on Facebook Share on Twitter Share on LinkedIn Share on Pinterest
The Geneva Motor Show 2009 saw Bugatti celebrating its 100th anniversary with the magnificent Veyron “Bleu Centenaire.” The radiant special edition of this supercar has rather one core feature to exhibit: its blue paint job. But an impressive feature it is.

The stunning one-of-a-kind edition is painted in the company’s famous Bugatti blue with a two-tone-scheme, a “sprint blue matte” for the side elements and a “sprint blue glossy” for the center section. The electrifying result is topped with roof-trim stripes, polished aluminium rear view mirrors, and specially manufactured rims with red brake calipers. Naturally, the engine modification is a shinny blue finish.

The price tag on the 100th anniversary Veyron amounts to 1.35 million Euros, but do not run for your checkbooks just yet: the heavenly Bleu Centenaire was sold already on the second press day of the Geneva Motor Show right at the Bugatti stand. Tough luck. According to the company’s press release, though, the rest of us should not despair as, apparently, further surprises await at Concorso d’Eleganza Villa d’Este on April 24 to 26.
2.8
Score
Popularity
Activity
Freshness
View Innovation Webinars