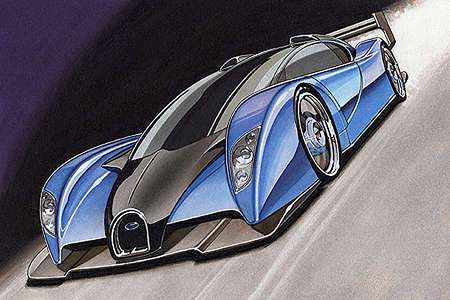 Going Like Sixty — January 14, 2008 — Autos
References: autoblog
Bugatti has their sights set on unseating Ferrari as the world's supercar manufacturer. On the heels of the VW-built Veyron, comes Project Lydia, named for Bugatti's wife.

We thought the Bugatti Veyron Pur Sang was ridiculously priced at $2 million, but Project Lydia is a $3 million dollar ubercar with around 1175 horsepower... and yes, it's street legal!

It's designed like a European road-course race car rather than a grocery-getter.

Implications - Auto Blog has stated that Project Lydia will likely have a version the the Veyron's 8-liter quad-turbo W16. Since the car is still a project, the German magazine Auto Motor und Sport have depicted the new Bugatti styled with aspects of a Le Mans racer. It is featured with different colors such as blue with black. The spoiler on the back really makes this super-fast car look like a real racer.
5.5
Score
Popularity
Activity
Freshness