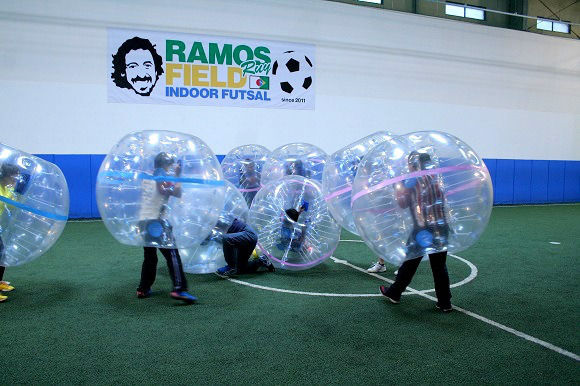 'Bubble Soccer' is Becoming an Extremely Popular Sport in Japan

Laura McQuarrie — April 16, 2014 — Lifestyle
References: en.rocketnews24
"Bubble Soccer" is a bizarre hybrid between soccer and football that originated in Norway and is now becoming wildly popular in Japan. For the most part, the soccer game is played as usual, except that players wear inflatable bubble suits, which allows the game to be a lot rougher, without the players getting hurt.

On April 4, a game of Bubble Soccer was held at the Ramos Ruy Indoor Futsol Field in Tokyo, where people could watch or participate in a match. This was Japan's 11th official game of Bubble Soccer and it's surprisingly popular among women, as well as people of all levels of fitness, since everyone seems to be put on relatively equal playing fields when they're in a giant inflatable suit.