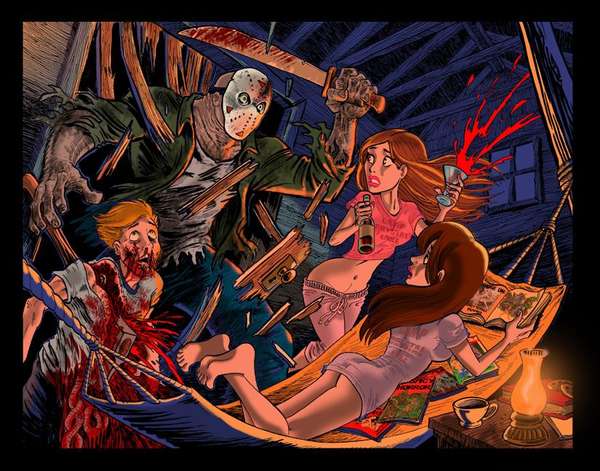 Jason Soy — February 12, 2012 — Pop Culture
References: bryanbaugh.blogspot & all-about-villains.tumblr
Share on Facebook Share on Twitter Share on LinkedIn Share on Pinterest
While Hollywood’s busy trying to reinvent these iconic horror villains of the ‘80s for contemporary audiences, Bryan Baugh is preserving their essence with these wondrous illustrations. Depicting Jason Voorhees, Freddy Krueger and Michael Myers in their respective films, each Baugh rendering brings viewers back into the headspace they were in while watching each movie. And he doesn’t skimp on the brutality either as Baugh graphically shows torsos being hacked in half, slashed, stabbed and other frightening things.

Bryan Baugh is a Thousand Oaks, California-based illustrator who has a penchant for rendering images inspired by the silver screen. He gravitates towards films that put audiences at unease and enjoys depicting creepy or ghoulish subjects as much as possible. As he himself describes, “I draw bloody, scary, goofy monsters and half naked girls.”
3.2
Score
Popularity
Activity
Freshness
Attend Future Festival Virtual