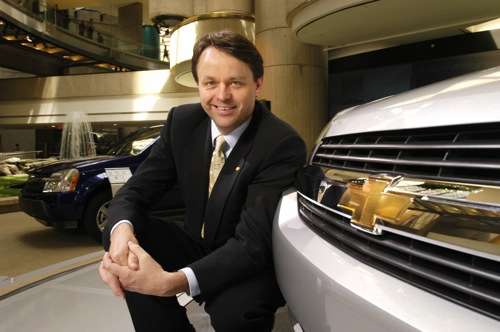 In the midst of GM’s bankruptcy and bailout earlier this year, Chevrolet is uniquely positioned to kick things up a notch. I sat down with Brent Dewar last week to discuss the future of Chevrolet in terms of design, branding and generational marketing. Check out our in-depth interview below to gain some insights into the evolution of this key American auto brand.

Many of us remember or have grown up with our parents reminding us that from the 70s-90s, there wasn’t really anything exciting about Chevrolet cars. But now, my dad and I can ogle the Camaro together, and my mom and I are talking about the Cruze. Is this cross-generation appeal intentional?

Yes. Glad you noticed. We believe brand preferences happen when you’re a child, maybe in that 6-9 [age range], so a lot of thought and effort went into it. The Chevrolet brand has positive equity, and we’ve tried to distance ourselves from the GM discussion, and it has positive equity around the world, so we started about five years ago, when we were more of an international brand. It’s more than a play on words, we’re trying to think globally and look not for consumers, but for brand enthusiasts. 5 or 6 years ago, I gave my team the example of Apple enthusiasts.

The idea of capturing this enthusiasm that I felt for cars was the nugget for that idea. We look at the world, and there’s lots of enthusiast groups, maybe 5 or 6 for Chevy, that we target.

The first is the modern family, that’s where Chevy’s strength has been. Affordable, upper-grade value, all about style, and tiers. So whether it’s the Equinox, or the Malibu or the Traverse, they’re targeted at families, and we’re going to continue to improve on that.

The second part we were really trying to get to is what we call the youth market. We lost the college kids—we actually sell on college campuses, but I would say that our market share has been more than our emotional appeal. And we recognize that, so we had to go down and start thinking about it.

Michael Bay is here [at the LA Auto Show]. When we created our commercial “The American Revolution,” we were sitting around talking about chase scenes and bullets, so we went to the agency and we met Michael Bay, and from that, he comes up with this idea of this project he’s got called Transformers. We were still in concept of what the Camaro would be—it didn’t exist. We showed him pictures, [and] we thought of doing a Camaro to try to capture that youthful imagination that I had when I was 8 or 9. And it’s achieved that.

So the second move, we added the Spark, which is a little minicar that’s in there. [We’re] trying to get younger people recognizing that something cool is going on, something different is going on at Chevrolet.

The proof point is ultimately the delivery of that, so [my team and I] talked about young kids developing their brand preferences and then having them design for the youth market—Gen Z, Gen Y and those that are coming. It’s gotta be economical, it’s gotta be affordable, it’s gotta be fuel-efficient, it’s gotta be friendly… but it’s gotta be a car that’s styled right, and that’s what you’ll see in the next-generation Aveo, we’re just launching the Spark, the mini car—we’re launching it in Greece for all of Europe this week.

And then the fourth group is what we call eco enthusiasts. I’m one of those—I’m a huge environmentalist, I have been my entire life—and then seeing that come together, whether it’s the simplest form of just building great fuel-efficient cars all the way to changing the paradigm of hydrogen fuel cells, or making biofuels out of garbage—can you imagine, everybody’s got garbage—we’re doing this! And then the electric vehicle, which is really what the Volt is.

It’s a long answer to your question, but yes—we’re trying to get this fusion of family members, and youth, and talking about it, and can the brands stretch elastically to do that and still retain our performance DNA which our founder created? We go racing responsibly—I love racing, whether it’s Corvette or Lamborghini or Ferrari. People say, “How can you be a racing guy and be an environmentalist?” You can be both. We’ve pushed every series in the world to go green racing. We raced in the 24-hour, we were in the 12 hours of Sebring, we raced with ethanol made from wood chips and we won, so you can do it.

We try to find performance enthusiasts, eco enthusiasts, modern families, and try to get them passionate about the brand. Can we someday in the future look back at these moments and say that it started with that kernel of an idea of trying to change the [brand’s] positioning? I’ve got a cool job.

When you think of iconic Chevys, there’s the ‘57 Chevy, the ‘69 Camaro, the ‘63 Corvette. All of those cars aligned with a very specific lifestyle—they still do. That focus on lifestyle alignment seems to be coming back with the current Chevrolet fleet.

It’s by design. We set out, Mike Simcoe and I… 5-6 years ago, I was general manager at Chevy US and he was my design partner, and we designed to make every Chevy from the ground up. We’ve got 11-12 studios around the world designing them. We’ve got people in London England around the world designing them, LA, Asia, Brazil, trying to set that brand positioning so that we will always be true to the design of a Chevrolet. In our DNA, our founder, Louis Chevrolet, would go off racing every Friday. There’s the performance aspect in the vehicle, but also the design cues.

What you’ll see is, well, you saw the design of the new ones coming in, the double aperture grill, the round tail lamps. And we had a big debate, Mike and I and the team, about creating this dual cockpit, because that’s what I love about the Corvette. We didn’t want to be limited, we could use color and tonality. We wanted to command the position that you were in a Chevrolet.

I tell my team, there needs to be a little bit of a Corvette and Camaro in every Chevrolet. So even though you might be buying an entry-level vehicle, it has that “fun to drive” element. We also say, now, that there needs to be a little Volt in every Chevrolet. Because when we did the Volt, which is also fun to drive, because of its instantaneous torque, you can chirp the tires, you can do all kinds of stuff. So you can be petroleum free and still have fun. For someone like myself, who never commutes more than 40 miles, I would never use another drop of gas. Never. Now, if by chance, my brother, my sister, my family member wants to go a little bit further, they can, and still runs in that extended-range mode.

But what’s cool about it is all of the aero and design things we learned to make the Volt go that much further is now on a Cruze. Because once you knew that, you can say, “Wow just changing this little aperture of the deck lid got us that many more miles, well, that was cool.” And we learned a lot about aero in the design of our vehicles from our racecars. Just think about turbulence off the car, so we took our racing learning to fuel economy. Thats why you get such great fuel economy on a Corvette. It’s amazing.

[On an entry- or mid-level car], you expect minor details to be missed—plastic dials and buttons everywhere. The Cruze isn’t like that at all.

I’m glad you’re noticing that. A lot of our attention is focused on those details. Our modern family is largely targeted at females, because they notice that. Of course, us guys, we clunkily get into things. In the modern family, though, the decision-making purchasers are the female head of households.

I saw the Camaro at SEMA in a billion different ways and it was mean. I read the story about the 102-year-old man who bought a Transformers Edition Camaro. That’s the spirit of what this is all about, right?

Yes. That exact same week, there was this six-year-old kid in Wisconsin. [He and his mom] went by the dealership and there was a Transformers Bumblebee [Camaro] out front—and it was sold, but parked waiting for the consumer to pick it up. And the little boy came by the vehicle and was walking around, and he stopped in front of the vehicle, staring. So the sales manager came out and said, “Would you like to see it?” So he’s standing there, all excited to look at the car, and his mother asks, “Well, what are you doing?”

Part of what we’re trying to do is this whole medium-meets-the-message… to be relevant and communicate the tonality. So when we’re talking to the female head of household, we’re giving them the right media outlet, and when you’re talking about Gen Y, Gen X, you’ve gotta be right in social media, you can’t just dabble in it. You’ve gotta be responsive, but you’ve also gotta communicate in their language and get it. It’s the same with the youth and the kids—it’s just a great opportunity. It’s harder, but it’s more fun.

You can follow Brent Dewar on Twitter @BrentDewar. Thanks for your time and insights, Brent!
3.3
Score
Popularity
Activity
Freshness
View Innovation Webinars