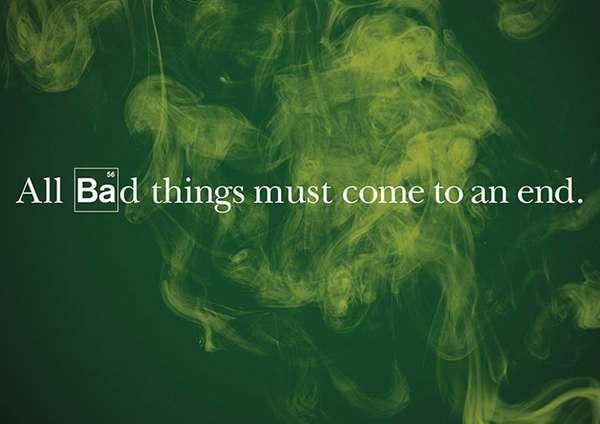 — June 11, 2013 — Pop Culture
References: blogs.amctv & laughingsquid
Share on Facebook Share on Twitter Share on LinkedIn Share on Pinterest
The new Breaking Bad poster for the final season has just been released, exciting fans everywhere with its vague hints as to what coming episodes will hold. The poster is simple in design, employing a minimalist background with featured text instead of character portraits.

The poster's body is the show's iconic green color, and shows wisps of smoke trailing upwards and out of the poster's frame. Two lines of text are featured on the poster in a bold, white font. One line reminds viewers to tune in on August 11th, while the other hints at some intense future episodes of the hit television series: "All Bad things must come to an end."

For Breaking Bad fans, the next two months hold nothing but waiting and anticipation. This poster's cleverly elusive design will only augment that anticipation, as it reveals nothing about the content of the future episodes, choosing instead to tantalize viewers by admitting that the episodes are intense, without allowing them a glimpse into the series' final days.
1.4
Score
Popularity
Activity
Freshness
Get Trend Hunter Dashboard

90s-Inspired Remixed Intros
This Fan-Made Breaking Bad Intro Asks 'What If This Aired in 1995?'