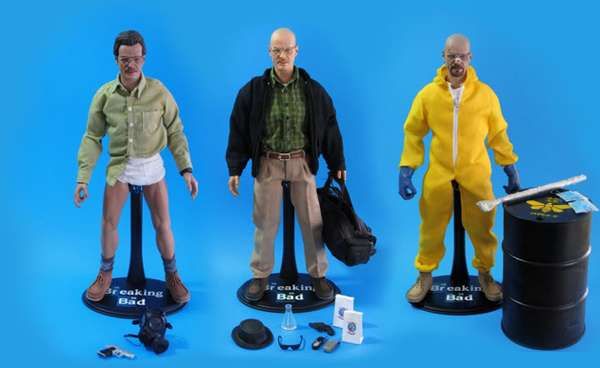 Marina Rotharmel — October 2, 2012 — Pop Culture
References: huffingtonpost & laughingsquid
Share on Facebook Share on Twitter Share on LinkedIn Share on Pinterest
Artist Trevor Grove can't get enough of the AMC series Breaking Bad, which is why he created a series of Breaking Bad figurines. According to the Laughing Squid, Grove, who is a part of the team at Sideshow Collectibles, gave Vince Gilligan the creator of the AMC show, the Breaking Bad figurines as a gift.

Grove designed and produced many different versions of the main character Walter White, all of which are his most iconic looks from the show. He created a version of the season 1 Walter White when he still has hair, dressed only in his underwear and a green dress shirt; Walter's alter ego Heisenberg, dressed in his black coat, green plaid shirt, khakis and the iconic black hat, and finally, his meth lab look, dressed in his yellow lab jump suit.

This is an awesome series that any fan of the show would certainly enjoy.
5.5
Score
Popularity
Activity
Freshness
Access Advisory Services