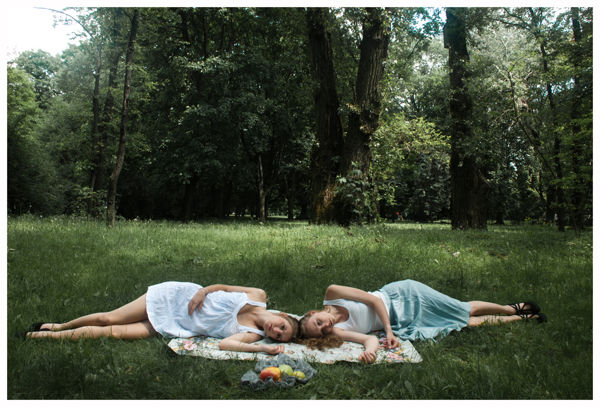 ‘Breakfast on the Grass’ by Kasia Drozd Evokes a Youthful

Sarah Dos Santos — December 7, 2013 — Fashion
References: behance.net & behance.net
Share on Facebook Share on Twitter Share on LinkedIn Share on Pinterest
'Breakfast on the Grass' is a youthful photography series by Kasia Drozd. It features two models that appear to be identical twins both by their similar outfits and their facial features. One of the model’s faces is hard to make out, making her identity somewhat a mystery. The models look as if they're lost in a dream world like mirror images of Alice in Wonderland. The baby blue dresses add a youthful yet magical element to the shoot, especially in comparison with the lush green surroundings, which are often associated with fantasy worlds.

As these girls lie on the mat, they look back at each other as if looking into a mirror. The photographer played with symmetry in some of the images, which adds to this reflective, twin-inspired series. The models seem fragile and innocent in their youth with their long, golden hair, but there is something eerie in the way the darkness of the woods seems to lurk behind them.

'Breakfast on the Grass' plays with the idea of innocence and the dangers of it -- the twins are alone in the woods and as they wander in their vivid imaginations they are also distracted from the dangers of the real world.
5.5
Score
Popularity
Activity
Freshness
Attend Future Festival