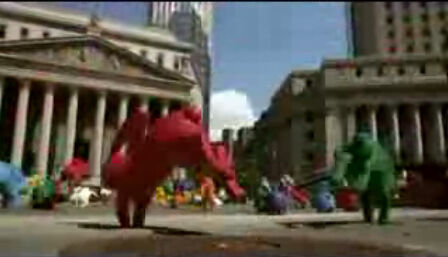 "They're the ones behind the ad with all the superballs bouncing down San Francisco's hills," MTV news reminds. "Their latest commercial has claymation rabbits hopping through New York City to the sweet sounds of the Rolling Stone's 'She's A Rainbow.'"

The clip starts out with the colourful formation of tiny clay rabbits which begin bouncing towards a common meeting place in NYC, ultimatley gathering to form one giant clay bunny as urbanites look on in amazement. As the Stones track continues, the cluster breaks up again into multi-coloured cubes which rotate to form an animated spiral of colour, ending with the catch phrase, "Colour like no other."

Check out the new clip!