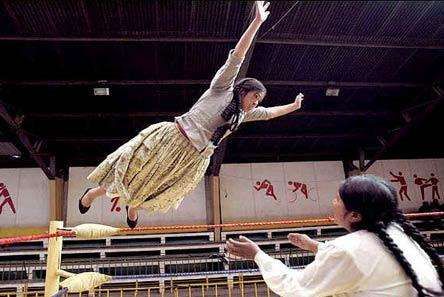 Hernando Gomez Salinas — September 1, 2006 — World
References: www2.gol & theuncoolhunter
Share on Facebook Share on Twitter Share on LinkedIn Share on Pinterest
Welcome to Bolivian Free-style Wrestling. Unlike the extravagant WWE, the women of Bolivian wrestling keep things real by wearing their traditional red skirts, white pompoms and a golden laced shawl, the traditional dress of the Aimara women. In Bolivian wrestling, there are no show lights, no full arenas, not even a million-dollar announcer. At â€œEl Altoâ€, Bolivia, with 800.000 Aimara and Quechua native inhabitants, fighting means going back to a time when late at night a boxing show used to present men wearing black outfit and the event was broadcast to the blinking black and white televisions, with the exception that the Bolivian free-style wrestling is not broadcast. Bolivia has its own team of fighters that wrestle in choreographic fights. The Bolivian organizers have introduced the â€œCholitasâ€ fighters, native Bolivian women who wear bowler hats and multi-underskirts. It is an exotic show in which the classic Bolivian â€œCholitasâ€ fly past knocking to each other over and over again. Those who want to see the fights - a growing number if you want â€“ fill the â€œCentro Multifuncionalâ€ of El Paso, getting in hundreds and paying a dollar per person to sit on cement stands with very low temperatures (it gets colder at night), and holding tubs of pop corn. In a city of daily penuries, free-style wrestling brings amusement to people who have no time or money to have fun. Welcome to the show.