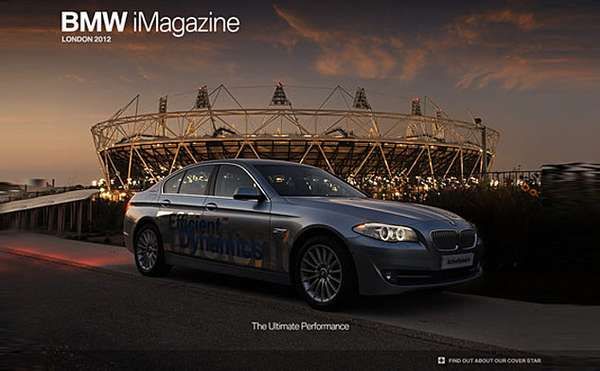 Created by Partners Andrews Aldridge, the BMW iMagazine opens with a beautiful piece of time-lapse photography, which shows a sunset over the Olympic Stadium. The special edition -- and free -- magazine provides exclusive video interviews and footage of leading Olympic athletes doing what they do best, such as Rebecca Adlington driving her new BMW 6 Series Convertible. Other athletes to be featured in the BMW iMagazine Olympics edition include Steve Backley, James Cracknell (also guest editor of the magazine), Tim Brabants and David Weir.

According to Campaign, BMW is a top-tier sponsor of the 2012 Olympics and will be providng a fleet of 4,000 cars, motorcycles and bikes for athletes and officials.
1.3
Score
Popularity
Activity
Freshness
Attend Future Festival