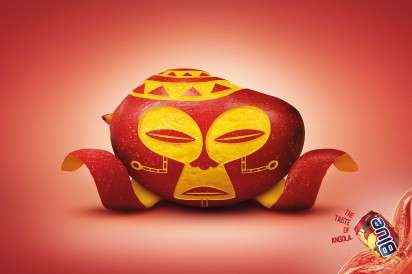 The Blue 'Taste of Angola' Campaign is Colorful and Exotic

Meghan Young — November 28, 2012 — Marketing
References: barlisboa & ibelieveinadv
Share on Facebook Share on Twitter Share on LinkedIn Share on Pinterest
The Blue 'Taste of Angola' ad campaign captures part of the essence of the Southern African country by way of some creative fruit peeling. Taking a mango, lemon and an orange, the fine folks over at the BAR ad agency, which is based in Lisbon, Portugal, have carved common tribal faces into the skin of each. Vibrantly colorful and extremely exotic, the images will capture people's attention immediately.

Art directed by Eduardo Tavares with creative direction by Diogo Anahory and José Bomtempo, the Blue 'Taste of Angola' ad campaign essentially promotes the flavors the soft drink company has recently released. Shot by photographer Masayuki Kondo, the images may be simple, but the use of such bright backdrops really makes the fruits pop right off of the page, making them rather irresistible.
3.6
Score
Popularity
Activity
Freshness
View Innovation Webinars