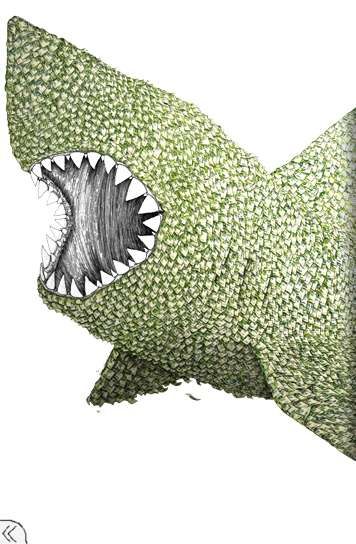 The BLU Digital 'Notebook Drawings' Stick up for the Enviroment

This is not to say that the illustrations are innocent or carefree. Quite the opposite, BLU's work depicts macabre, morbid scenes worthy of a horror movie. A shark with a gaping fang-filled mouth bursts out from one picture; a closer inspection of this shark shows that it is made entirely of bank notes -- a metaphor, perhaps? BLU's drawings aim for more than just shock value.

A perusal of the BLU series will reveal that many of the illustrations portray the ugly and ubiquitous nature of trash and pollution. The scenes that BLU depicts are all too familiar in this regard. Through this familiarity, BLU manages to encourage an acute awareness of pollution in his viewers.