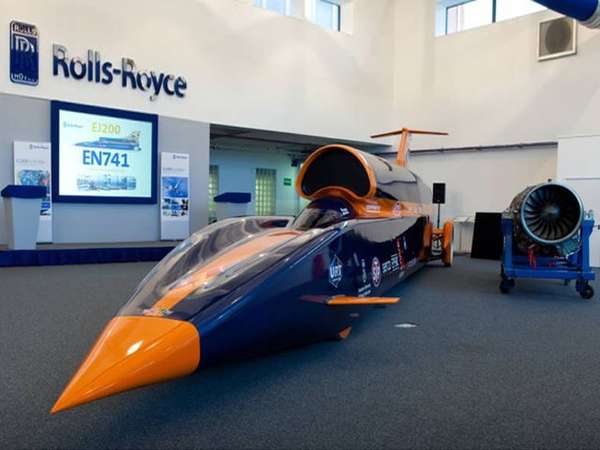 The Bloodhound SSC Has the Same Engine as the Eurofighter

Michael Hines — May 21, 2013 — Autos
References: bloodhoundssc & carbuzz
Share on Facebook Share on Twitter Share on LinkedIn Share on Pinterest
Rolls-Royce has just supplied some serious horsepower to the Bloodhound SSC (Super Sonic Car), a car designed solely to shatter the automotive land speed record. In the interest of honesty, the Rolls-Royce that supplied the EJ200 jet engine to the Bloodhound SSC isn’t the same company that makes luxury cars. No, this is Rolls-Royce Group plc, a company which works in the aerospace industry making engines. (The two companies split awhile back.) In case you were wondering, the EJ200 is the same engine used in the Eurofighter Typhoon.

The EJ200 can produce as much as 20,000 pounds of thrust to the Eurofighter Typhoon. Together with a Cosworth F1 engine, the Bloodhound SSC is hoping to hit 1,000 miles on land.

Eco Speedsters of the Future
2025 Sunbeam Tiger is Electrified Beauty