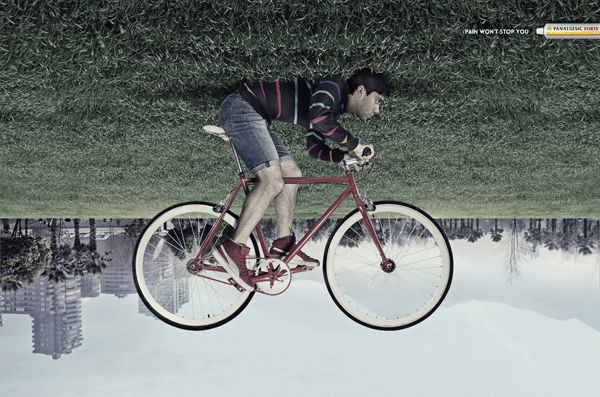 Meghan Young — June 2, 2014 — Marketing
References: adeevee
Share on Facebook Share on Twitter Share on LinkedIn Share on Pinterest
For many people, pain of any sort turns their world upside down, a sentiment that is surreally embraced in the Bjarner Laboratories Panalgesic Forte ad campaign. A cyclist, who appears to be suffering from back problems, is captured riding nowhere upside down. Laying on his back with his bike in the air, it is easy to see how helpless and unproductive he feels while in pain.

The Bjarner Laboratories Panalgesic Forte ad campaign was conceived and executed by Koenig & Partners, an ad agency based in Guayaquil, Ecuador. It was creative directed by Cesar Sepulveda and Fabian Martinez, who also art directed the campaign. The hilarious image was shot by photographer Juan Pablo Caraballo. It read, 'Pain won't stop you,' which shows how determined people can be a lot of the time.
3.5
Score
Popularity
Activity
Freshness
Attend Future Festival Virtual