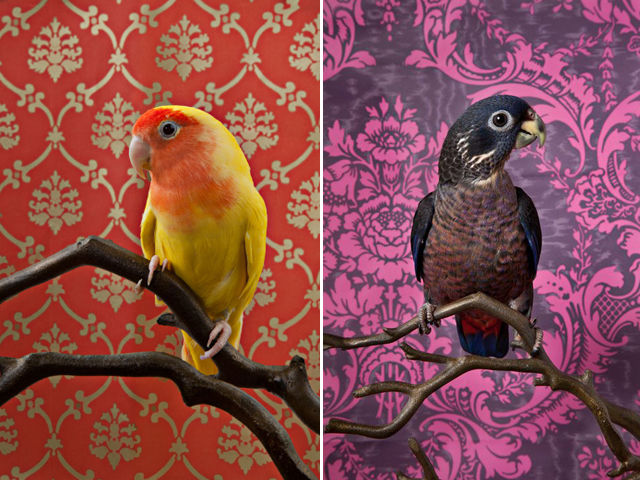 'Bird of a Feather' Pairs Exotic Birds with Vintage Wallpaper

Vasiliki Marapas — July 8, 2014 — Fashion
References: clairerosenphoto & honestlywtf
Share on Facebook Share on Twitter Share on LinkedIn Share on Pinterest
Claire Rosen's latest project, 'Birds of a Feather,' is a live portrait series starring colorful, sometimes exotic fowl. For instance, the series depicts both the common Parakeet and the unusual Hyacinth Macaw. Each bird's color is further accentuated by the vintage wallpaper behind it.

This project makes sense for Rosen, an award-winning artist who was named one of Forbe's '30 Brightest Under 30' for Art and Design in 2012 and 2013. Her compositions seek to explore and illuminate the human condition. In terms of aesthetics, Rosen is often darkly whimsical; she constantly references the past, with a particular fascination and emphasis on the Victorian era and its complicated notions of beauty.

Common themes in her work, several of which can be seen in this pretty series, include femininity, nostalgia, memory and how we conceive of the self.
3
Score
Popularity
Activity
Freshness
Access Advisory Services