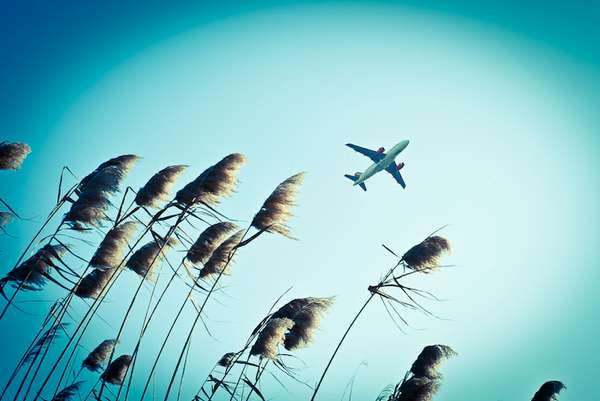 Meghan Young — June 6, 2012 — Fashion
References: sarabiaphoto & mymodernmet
Share on Facebook Share on Twitter Share on LinkedIn Share on Pinterest
The title of the Bird Hunter photo series may be deceptive, but it does convey the theme perfectly. Instead of real live birds, the photoshoot centers around their manmade cousin twice removed: the airplane. In place of a rifle, Dani Garcia Sarabia's weapon of choice is a camera. Crouched among wheat and reeds, hidden from view, the Barcelona-based art director and photographer shoots his prey in a way that immortalizes them rather than killing them.

Shot from a low perspective and angled upward, the Bird Hunter photo series does a great job of making the viewer feel like he or she is in the photographer's shoes. Sarabia describes, “Waiting since before the sunrise on a cold winter morning, with my camera loaded and ready to fire, you hear the shrill sound of the engines and it appears in the sky, the silhouette of the great steel bird. It’s time to aim and shoot…”
4.2
Score
Popularity
Activity
Freshness
Attend Future Festival