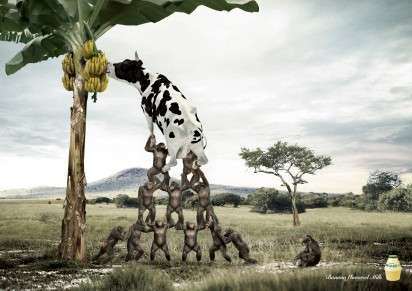 Conceived and executed by Cheil Worldwide, an ad agency based in Seoul, South Korea, the Binggrae Banana Flavored Milk ad campaign is ridiculously fun. In one print ad, a cow is balancing impossibly on a pyramid of monkeys to reach the bananas hanging in a tree. In the other ad, one monkey is feeding a cow a banana. Art directed by Giho Lee with creative direction by Hui-Kang Yea, the Binggrae Banana Flavored Milk ad campaign features graphic designs from Hee-Chan Yang.
3.7
Score
Popularity
Activity
Freshness
View Innovation Webinars