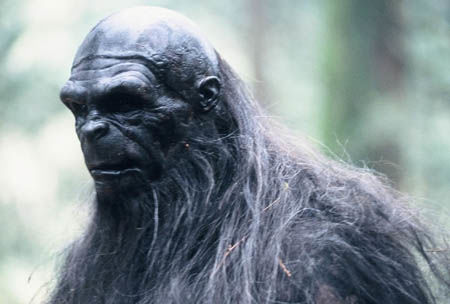 Bianca — August 15, 2008 — Unique
References: searchingforbigfoot & freep
Share on Facebook Share on Twitter Share on LinkedIn Share on Pinterest
At a Bigfoot conference this afternoon, the secret myth of the Big Foot was finally set to be revealed to a mass public audience. CNN covered the event through a webcast, which was also live blogged, and Twitter was being watched by people eager for more on the Bigfoot Press Conference.

The Sasquatch was caught by two hunters in Georgia who promised to make DNA evidence and visual footage public after they claimed to have found the body of a Bigfoot creature. The Georgians say the “Hairy Man” was found in the North Georgia mountains, a place the beast has been “spotted” many times in the last decades, but never caught.

Hours before the conference, Biscardi, a world-famous Bigfoot hunter and entrepreneur (and a Las Vegas promoter, by the way), had his site, searchingforbigfoot.com, crash after being swamped by traffic.

But the conference was a disappointment. Biscardi did not show images, he merely left people hanging, upsetting a lot of media.

“Starting Monday I should have assembled some fine scientists that will do the autopsy to find the origin and death of this creature, and at that point in time we will make it known and hopefully we’ll get somebody to come in and film it to show it to the world as it’s being done. I want to get to the bottom of it.”

So does everyone else. What was the point of the press release? Journalists got more information before hand.

“I was in shock,” Biscardi told Discovery News. “It was a euphoric experience for me. After 35 years of searching for this thing, it just blew me away. There I was face-to-face with this thing. It was about 7 feet tall and it weighs over 500 pounds. It had five fingers and five toes, very much like a human. His feet were in excess of 16 inches, and his hands from the palm to the middle finger were in excess of 11 inches. The teeth were protruding because rigor mortis had set in, and the tongue was out. Its guts were also out of its stomach, and it looked like the gasses in the body caused this because they had this thing since June 10 or 12. I don’t remember exactly, but [they had it] for about two months. They were afraid. They didn’t know what to think about what they had.”

In addition, he told Discovery News this wasn’t the only creature of its kind.

“There is a minimum of 3,500 of these things, a maximum of 7000 in North America alone,” Biscardi said.” Their habitat is so dense and rural that GPS and cell phones will not even work. It is unexplored territory.”

Finally all the anticipation of the Bigfoot or Sasquatch hype was supposed to have been put to rest, but now it’s only angered people.

Now that they had nothing to show for themselves, most people are assuming this is all a hoax, as are we....

30 Beastly Bigfoot Inspirations
Real or Not, the Abominable Snowman is Alive and Everywhere