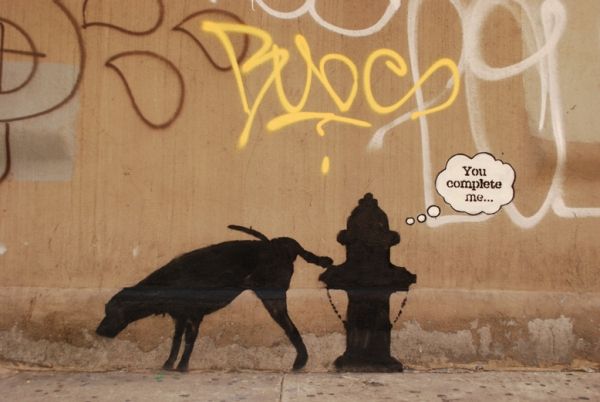 Banksy's NYC Exhibit 'Better Out Than In' is Continually Updated

Alyson Wyers — October 8, 2013 — Art & Design
References: banksyny & designtaxi
Share on Facebook Share on Twitter Share on LinkedIn Share on Pinterest
Street artist Banksy released the third piece for his New York exhibit 'Better Out Than In' via Instagram yesterday, October 3rd. He continues to update his blog with new installations. The exhibit so far features graffiti work around New York City in Brooklyn neighborhoods like Bushwick, Williamsburg and Delancey as well as Manhattan, Midtown and the West side.

The fourth group is an ongoing series that updates existing graffiti with the tag 'The Musical!' giving it a "Broadway makeover." The third piece in Better Out Than In depicts a dog lifting his leg to urinate on a fire hydrant with a thought bubble above it reading, "You complete me..."

The second installation, 'This is My New York Accent,' and the first, 'The Street is in Play,' were released consecutively. It is safe to assume more parts in this series will be released on a daily basis.
3.9
Score
Popularity
Activity
Freshness
Attend Future Festival Virtual