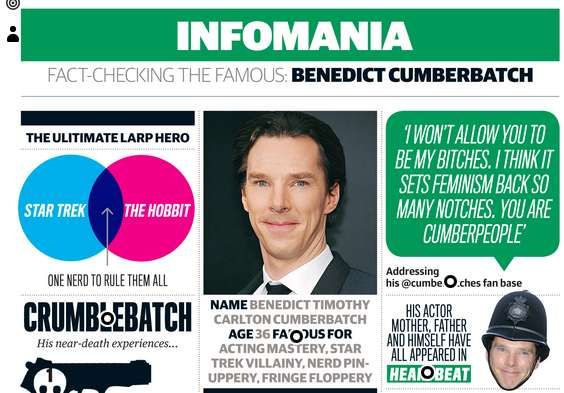 These Benedict Cumberbatch Facts Might Shock and Surprise Fans

— June 30, 2013 — Pop Culture
References: guardian & lostateminor
Share on Facebook Share on Twitter Share on LinkedIn Share on Pinterest
A new infographic displaying all the Benedict Cumberbatch facts known to the public has been released, much to the excitement of fans of Cumberbatch's work. Cumberbatch is known for having an exceptionally strong online following. Numerous Tumblr, Twitter and Facebook pages have been erected in honor of Cumberbatch's most famous characters: Sherlock Holmes, John Harrison from Star Trek, and Smaug from The Hobbit: Desolation of Smaug.

The facts displayed in this infographic only serve to support the claims made by Cumberbatch fans. Over eight million UK viewers have settled in to watch his BBC miniseries, Sherlock Holmes, while a mere one million have watched Elementary, the American take on Sir Arthur Conan Doyle's beloved character.

With a slew of new films and TV episodes being released this fall, Cumberbatch is looking forward to a brilliant and busy career. His solid fan base, which leads to infographics like this one, proves that Cumberbatch, with his posh British star power, is here to stay.
0.8
Score
Popularity
Activity
Freshness
Access Advisory Services