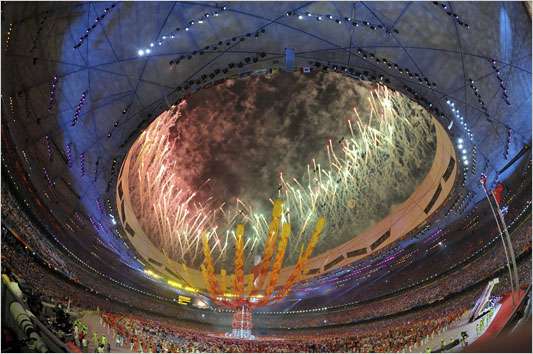 "The Grandest Carnival of Mankind"

Noora Abu Eitah — August 26, 2008 — Special
References: olympics.blogs.nytimes & ndtv
The 29th Olympic Games came to an end this week, but not without drama. The media called the ceremony the "the grandest carnival of mankind", which was a well-deserved title as it featured an amazing display of fireworks, showcasing a rich blend of technology, skill and imagination.

The circular firework artwork at the top of the Bird’s Nest symbolized the success of Beijing Games, as a circle in China’s culture is a symbol of harmony and renewal.

The acts had a futuristic look and feel, similar to that of the opening ceremony, creating a breathe taking show.

As a hand off to London for the 2012 Games, English Soccer superstar David Beckham was accompanied by a British girl of Indian origin, Tayyab Dudhwala, for the kick off of the handover ball.

This legendary event has indeed set a standard to all the following games. Will London be able to fulfill it?
1.6
Score
Popularity
Activity
Freshness