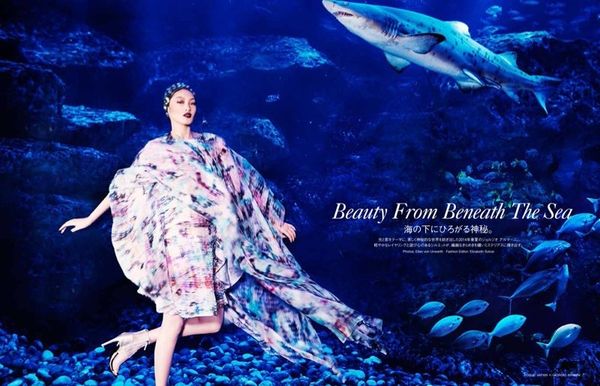 Vogue Japan's 'Beauty from Beneath the Sea' Stars Chiharu Okunugi

Meghan Young — March 12, 2014 — Fashion
References: vogue.co.jp & fashiongonerogue
Share on Facebook Share on Twitter Share on LinkedIn Share on Pinterest
The 'Beauty from Beneath the Sea' editorial doesn't take to the sea, but to a local aquarium, which is pretty much as close to sea life as many city dwellers will ever get. The electric blues and exotic creatures provide the perfect backdrop for the flowy dresses put on display. Exclusively showcasing the Giorgio Armani Spring-Summer 2014 collection, it focuses heavily on its use of patterns, textures and palette.

Shot by Ellen von Werth, the 'Beauty from Beneath the Sea' editorial is set to appear in the April 2014 issue of Vogue Japan. It stars model Chiharu Okunugi, who can be found in the Vogue Japan's Disney-themed editorial as well. The airy and feminine looks were styled by Elizabeth Sulcer.
5.2
Score
Popularity
Activity
Freshness
Jeremy Gutsche Keynote Speaker