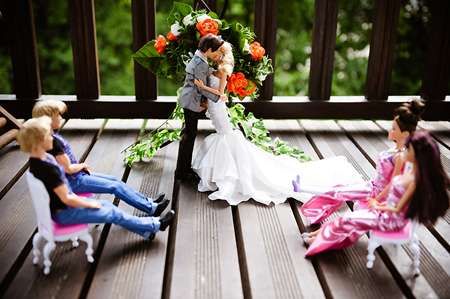 Emily Evans — August 30, 2011 — Lifestyle
References: blog.beatrice-dg & glamour
Share on Facebook Share on Twitter Share on LinkedIn Share on Pinterest
May I just begin by saying, on behalf of girls everywhere, that these Barbie & Ken wedding day captures by Beatrice De Guigne make me very, very happy! In fact, as I first began to scroll through Beatrice De Guigne's Barbie wedding album, it was almost hard to believe that these figures were plastic dolls and not friends I've known for decades.

With a background in intimate wedding photography, Beatrice De Guigne was able to capture images of plastic Barbie & Ken in poses that seemed both candid and realistic. Her shots began like any typical wedding day with pictures of the happy couple getting their hair done and putting on their respective tuxedo and gown, followed closely by captures kissing at the alter and finally, wedding reception shots. Dare I say that I like Barbie's dress better than Kim Kardashians?

Implications - Childhood is a time in many consumer's lives that, once in adulthood, represents simplicity and ease. As such, companies should consider creating sentimental products that allow consumers to take a trip down memory lane to a simpler time. Just as this Barbie wedding album is appealing to an older audience, so too will products that allow consumers to temporarily be kids again.
6.2
Score
Popularity
Activity
Freshness
Jeremy Gutsche Keynote Speaker