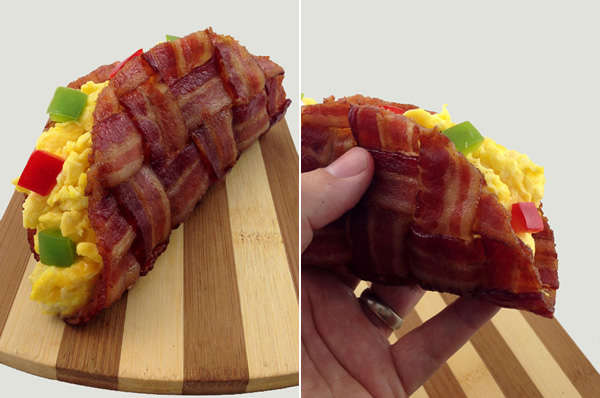 Meghan Young — August 29, 2013 — Lifestyle
References: dudefoods & neatorama
The Bacon Weave Taco is a bit of a morning meal heart attack. But that can be taken one of two ways. Some will find it a little over the edge health-wise while others will fall head over heels in love. As its apt name gives away, the Bacon Weave Taco is a taco-shaped shell that has been formed out of weaved bacon strips.

Created by Nick of Dudefoods, the Bacon Weave Taco is then filled with scrambled eggs and topped with green and red pepper. Of course, the fillings can easily be substituted or elaborated on. Relatively easy to make, after weaving the bacon, the shell forms its shaped by being balanced on a kabob in between two beer bottles.
6.1
Score
Popularity
Activity
Freshness